From The Open Atmospheric Society http://theoas.org

Statement from the Open Atmospheric Society on the paper ‘Peak tornado activity is occurring earlier in the heart of “Tornado Alley” ‘ (DOI: 10.1002/2014GL061385)

The recent paper by Long and Stoy published September 10th, 2014 in Geophysical Research Letters and sent out as a press release⁴ by the American Geophysical Union makes claims that are not fully supported by the data.

The source of the data is from the NOAA Storm prediction Center (SPC) database of tornado reports. The OAS has no issue with the data, and believes it is correct and representative of actual tornado reports.

However, interpretation of the data by Long and Stoy may lead to a conclusion rooted in reporting bias.

Since the introduction of the nationwide WSR-88D Doppler radar network from 1992 to 1997, the ability to spot smaller scale tornadoes has increased dramatically, with warnings being issued based solely on radar signatures. Simmons and Sutter, 2004 stated:

The accuracy of tornado warnings has increased over the decades, and with the advent of Doppler weather radar, warnings can now generally be issued before a tornado actually touches down.

Further, in 2008, the Super Resolution upgrade² to the WSR-88D provided even better detection of the weakest tornadoes:

These improvements in technology, combined with greater awareness, greater saturation of news gathering, increased interest in both private and commercial storm spotting, plus an increased ability to rapidly report tornadoes has increased the count of weaker F0 and F1 Fujita Scale tornadoes in the last two decades.

In the paper Tornado Trends Over The Past Thirty Years³ they state:

The increase in reported tornado frequency during the early 1990s corresponds to the operational implementation of Doppler weather radars. Other non-meteorological factors that must be considered when looking at the increase in reported tornado frequency over the past 33 years are the advent of cellular telephones; the development of spotter networks by NWS offices, local emergency management officials, and local media; and population shifts. Changnon (1982) and Schaefer and Brooks (2000) both discuss these influences on tornado reporting. The growing “hobby” of tornado chasing has also contributed to the increasing number of reported tornadoes. The capability to easily photograph tornadoes with digital photography, camcorders, and even cell phone cameras not only provides documentation of many weak tornadoes, but also, on occasion, shows the presence of multiple tornadoes immediately adjacent to each other.

These improved detection and reporting reporting methods most certainly contribute to recent increases in tornado counts, and by extension earlier and more frequent tornado counts than would have been recorded 30 years ago.

The annual tornado trends chart is a result of the following methodology applied to the SPC observed tornado dataset by Harold Brooks, NSSL and Greg Carbin, SPC5.

“An inflation adjustment was developed to reflect the improved detection. The SPC simple linear regression equation is fit to the 1954-2007 annual tornado totals. This equation is then used to compute the delta, or difference, between the original/observed annual tornado total and the smoothed, or “adjusted” annual total represented by the point on the linear trend line for that year.

“Using 2007 as the “baseline” year, we apply each year’s delta value from 1954 to 2007 to the linear trend value of 1283.3 for 2007. Each year is thereby adjusted, or standardized, to the 2007 annual tornado numbers. (Note that applying the delta of -185.3 to the 2007 adjusted value of 1283.3 results in the original/observed “baseline” total for 2007 of 1098 tornadoes.)
When these annual adjusted values are plotted, we see that the linear upward trend is removed from the data (see figure 2 below). Removal of this upward trend is desirable because the increase in tornado reports over the last 54 years is almost entirely due to secular trends such as population increase, increased tornado awareness, and more robust and advanced reporting networks. By removing the upward trend and making the broad assumption that 2007 represents something closer to reality for annual tornado numbers, we can attempt to answer the question, “what constitutes a normal year with respect to modern-day tornado reports?”

The answer becomes the adjusted average across the 54-year period, or 1283.3 tornadoes per year. This value is also the max trend line value at 2007 that was combined with the individual delta value for each year to adjust all annual totals in the data set.

In a note on September 17 to the OAS, Mr. Carbin added:

“I have not de-trended any more total annual data since the 2007 analysis. Obviously, we have experienced a few very quiet years since the remarkable year of 2011. The key point in the statement above is that we are expecting 2007 to represent something close to an average annual total. If we use the (E)F1 and stronger annual counts for the past 61 years, the annual mean is below 1000 tornadoes and there is a distinct upward trend in the annual counts). However, is we limit the annual EF1 tornado counts to the past 25 years (1989-2013) then we get an annual mean closer to 1200, and essentially no trend (see figure 3 below). Whatever period is used, one significant characteristic of the annual counts since 2000 is the profound variability about the mean. Some of the greatest annual standard deviations (both positive and negative) have occurred within a little more than the past decade. This is perhaps the most puzzling aspect of the record.”

Figure 3: EF1+ Annual Count not detrended for inflation due to improved detection (Carbin 2014) 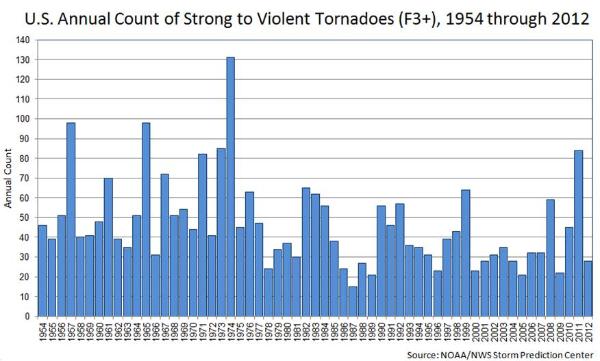 We also note, in the AGU press release for the Long and Stoy paper, it was mentioned:

“If we take Nebraska out [of the data], it is nearly a two-week shift earlier,” noted John Long, a research scientist in the Department of Land Resources and Environmental Sciences at Montana State University in Bozeman, Montana, and lead author of the new paper. For tornadoes rated above F0, the lowest rung on the original Fujita scale of tornado strength, the shift is also close to 14 days, according to a preliminary analysis by Long and his colleagues that’s not included in the new paper.

It is the opinion of The OAS that this sort of methodology to remove a portion of a dataset to cite a result is unsupportable and without justification. Climatic scale detection of earlier onset of tornado activity cannot be dependent upon removal of a portion of the dataset. Other analyses of the same data set by the primary investigator for tornado climatology show that there are no trends in frequency or intensity of tornadoes, and by extension, suggest that the claims made by Long and Stoy are little more than artifacts of statistical methodology and an increase in the ability to spot, report, and categorize tornadoes that would have gone unnoticed and unreported thirty years ago.

For more information on The Open Atmospheric Society, or to become a member, see http://theoas.org

[Added, should have been in original release] Prepared by OAS members Joe D’Aleo and Anthony Watts. Assistance from NOAA SPC Greg Carbin is gratefully acknowledged. For further information, comments, or other issues, write to contact “at” theoas dot org or use the contact form at http://theoas.org

3. Tornado Trends Over The Past Thirty Years by Daniel McCarthy and Joseph Schaefer of the NOAA/NWS/NCEP/Storm Prediction Center, Norman, Oklahoma http://www.spc.noaa.gov/publications/mccarthy/tor30yrs.pdf

This entry was posted on September 19, 2014, 12:01 am and is filed under Statements. You can follow any responses to this entry through RSS 2.0. You can leave a response, or trackback from your own site.